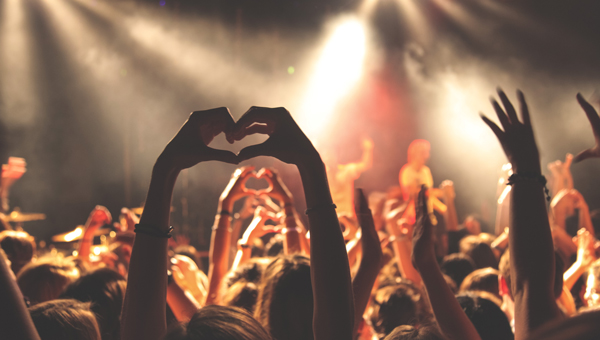 Recently, I attended a concert. It was a big one—like a completely filled football-stadium-sized concert. The musicians were talented and well-known, and the line to buy t-shirts seemed to never end.

The way we as a society interact with celebrities is something I think a lot about. I often wonder why so many people care more about the lives of people they will never meet than the neighbor living next to them. Musicians, athletes, and entertainers sometimes receive more of our focus and attention than the people in our home. Why is that?

As I enjoyed the concert, I again wrestled with some of these thoughts. Celebrities, it seems to me, conjure up a number of possible responses inside us:

Indifference. No doubt, there are numerous people famous in certain segments of the world or society that you have never heard about. And neither have I. However, to others, maybe even people very close to me, they would be considered well-known. But we are indifferent toward them—for any number of reasons.

Dislike. Sometimes, for very shallow reasons, we have made a decision to dislike a specific celebrity. We boo athletes that don’t wear our colors, express disdain over a celebrity who holds a different political view than our own, or feel that a certain writer isn’t nearly as good as the one we like better. Dislike of a person you have never met, based entirely on what you perceive to be true about them, seems like a pretty unwise response when you think about it.

Thankfulness. Sometimes, gratitude towards a specific celebrity is a correct response. Musicians who move us, artists who change us, athletes who bring pride to our city, actors or actresses who portray a character that brings us hope, or maybe a writer who has changed our life in one way or another. In these cases, thankfulness is proper—just as it would be toward anyone who has influenced us positively.

Appreciation. Appreciation, similar to gratitude, is often a positive response to those who hold “celebrity” status. That’s how I felt at the concert the other night. These were talented musicians who had spent a lifetime mastering their craft. I could appreciate the talent and work and discipline that was required to become the artists they had become. Similar feelings could be appropriate towards artists in other fields, executives, industry leaders, or entertainers.

Worship. This, in my opinion, is where we as a society begin to go wrong. Among researchers, “celebrity worship” is an academic term that refers to a continuum of unhealthy personal responses to celebrity status—ranging from attraction to uncontrollable behaviors and fantasies. According to some studies, 33% of people fall somewhere on this continuum in their interaction with celebrities–although only a miniscule amount would suffer from obsessional tendencies.

For the sake of this post, I define celebrity worship not on the end of the spectrum that afflicts only a small percentage of people, but the normalized, cultural obsession that seems to define so many:

Granted, even these actions above can be graded on a scale, but I wanted to offer a description of how I most often see celebrity worship.

Proper appreciation, even thankfulness, toward somebody in the public eye is a proper, even healthy response.

Worship, on the other hand, carries some significant dangers. Idolizing celebrities often causes us to overlook the very real, tangible mentors right in front of us. Celebrity worship, on the other hand, is often based only on public perceptions (sometimes carefully manipulated) of a person, which in turn results in incorrect assumptions about them. This is why fans can be so let down when a celebrity’s private actions end up not aligning with their public persona.

Celebrity worship can cause us to idolize and desire certain lifestyles that, at least from the outside, appear to bring greater happiness than the one we have causing us to miss some of the blessings right in front of us. It can result, too often, in watching another person’s life rather than making the most of our own.

Additionally, on a significant level, not keeping a celebrity’s role in our everyday life in proper perspective results in giving up more and more control of ourselves to them. Suddenly, the celebrity begins influencing how we spend our time, our money, and our energies. James Houran, author of Celebrity Worshippers: Inside the Minds of Stargazers said it like this:

There are people in your life that you ought to look up to as role models and mentors. Some you know well, others you will never meet. And it is certainly wise to feel appreciation and gratitude when appropriate.

But when our view of celebrities begins to move past appreciation and into undeserved worship, it would be wise for each of us to catch ourselves and consider the consequences—they are not benign.