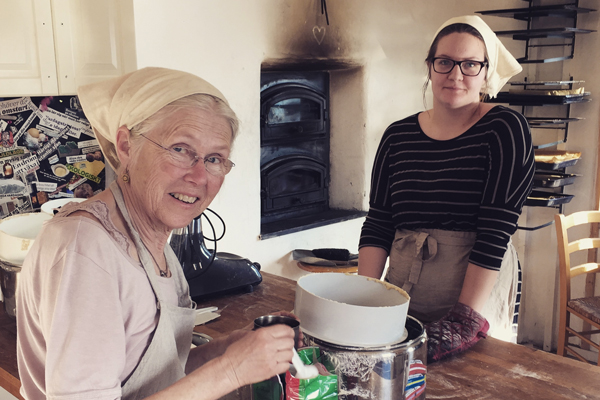 Recently, I visited Stockholm on behalf of Camino Magazine. Camino is Sweden’s largest sustainable living magazine. They were wonderful hosts organizing speaking opportunities at their own Sustainability Conference and local businesses.

I found the city to be beautiful. And the people even more.

In the middle of the week, there was a short break in our speaking schedule and we were invited by one of our hosts on a tour of some local museums. We quickly agreed.

Our host’s friend, Stina, accompanied us on our tour. And, at one point after lunch, she told us her story:

Stina once worked in the film and media industry in Sweden. But recently, she has found a new passion—baking. This is where the story gets amazing because her bakery is anything but ordinary.

Stina had begun to notice a surfacing problem in Stockholm: high school students who did not fit the typical mold in Sweden were falling through the cracks, dropping out of school—sometimes by choice, sometimes not. Because of the high priority placed on education in Sweden, these students were left with few options and frustrated parents.

Stina decided to act and did something almost nobody would ever think to do. She built a wood-oven in her home and (even more significantly) she invited over a number of high school drop-outs to bake bread. Today, 18 months later, she hosts some of society’s most at-risk teenagers in her home 5 days/week where they bake goods for a local cafe.

Even Stina’s neighbor has gotten involved building a mobile cart to help deliver goods around town.

As anyone would do after hearing the amazing story, we inquired about this bakery and were thrilled to receive a tour. (pictured above is the bakery with one student and one volunteer—I’ll let you guess which is which).

Stina will be the first to tell you it has not always been easy. There have been difficult times as trust needed to be built. But she can talk for hours about how this little bakery has touched and changed the lives of forgotten teenagers in Sweden.

It all started with one simple decision: Stina decided to believe in the good of people. Even when others thought hope was lost, Stina saw beauty.

She found good and potential and opportunity where others saw none. For the remainder of her life, Stina will be called blessed. And her positive influence will be extended to future generations through the lives she believed and invested in.

Depending on your fluency in Swedish, you can read more about the bakery.

***
A version of this story originally appeared in the March 11 edition of the Becoming Minimalist Newsletter. I just wanted to share it here as well.