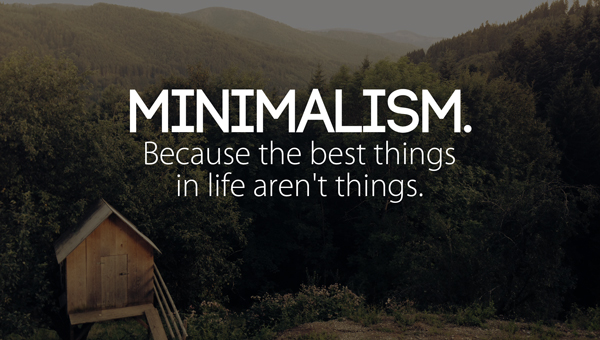 The term, Baader-Meinhof, refers to the phenomenon when you are introduced to a new idea and suddenly start seeing it everywhere you look. Frequency Illusion is another phrase used to explain the cognitive bias.

For example, you have no idea so many people are playing Settlers of Catan until your friend introduces you to the game. Once he does, you start noticing people talking about it everywhere you look. Or you don’t notice the number of Jeeps being driven on the road until you start driving one yourself.

This is one of the reasons you keep hearing about minimalism. A phrase you knew little about… until you were introduced to it… and now you are pleasantly surprised to see the word being talked about everywhere… even among some of your friends.

Let’s talk about that for a minute. Other than the phenomenon of frequency illusion, why are we seeing minimalism used more and more?

Ten years ago, I was introduced to minimalism by my neighbor. It was a short conversation that took place after a long morning of cleaning out my garage. After listening to a few sentences of me complain, my neighbor responded, “Yeah, that’s why my daughter is a minimalist. She keeps telling me I don’t need to own all this stuff.”

Those two short sentences changed the course of my life forever.

When I first heard the word “minimalism,” I searched for the phrase online. To my relief, I found some folks taking about it: Leo, Tammy, Everett, Colin. These men and women became my source of motivation and accountability. I was also encouraged by authors who were writing about a more culturally accepted phrase: “decluttering.” While not synonymous, many of their thoughts and ideas about owning less helped me along the way.

But still, relatively speaking, there were very few people writing or talking about the topic. It was certainly not a phrase being used frequently. And to the best of my knowledge, there were no websites dedicated entirely to the lifestyle (until this one, I suppose).

But a lot has changed over the ten years since I first started this blog. And these factors have led to a new world where minimalism is far more common today than in recent history.

Let’s look at the reasons you keep hearing about minimalism:

1. We own too much stuff. This blog has grown from just a handful of readers to over 1 million readers each month. When explaining this growth, I respond with a simple rationale, “Most people own too much stuff. And when somebody offers a countercultural approach that focuses on owning less, people are drawn to it.” There are a few exceptions, but most people these days recognize their lives would probably benefit from owning a little bit less.

2. The evolution of the word. Not long ago, when people heard the word minimalism, only the most extreme examples came to mind. While I craved a life with less, extreme applications of minimalism did not align with my most significant values. Correctly applied, minimalism ought to be rational, intentional, and an approach to life focused on purpose, not material possessions. Over time, people have latched on to this application of the word and living a more minimalist lifestyle has begun to look different than even a decade ago.

3. The use of the word in design. Minimalism as a term for design has been growing in popularity since World War II. It is currently used to describe movements in art, architecture, music, interior design, website design, and more. For the most part, this website is dedicated to minimalism as a lifestyle in owning fewer possessions. But that doesn’t mean the word is not used elsewhere in other ways.

4. The use of the word in advertising. Of greater concern to me is the use of the word “minimalism” in marketing campaigns. As the lifestyle grows in popularity, more and more people and businesses will seek to capitalize on its momentum for financial gain. As a result, I know of ads featuring minimalist wallets, pants, belts, watches, shirts… and countless other products. It’s the natural life cycle of a movement. And I’m thankful that the movement has grown in popularity to a point where marketing campaigns can be built around it, it just makes me sad to see it happen. If you think you need to spend a lot of money to become minimalist, you’re doing it wrong: minimalism is about owning less, not more.

5. The documentary “Minimalism” appearance on Netflix. Late last year, Minimalism: A Documentary about The Important Things made its debut on Netflix. It’s a film I’m thankful to play a small part in. I am unaware of the actual number of viewers since its debut, but I know they are significant. Special thanks to Joshua and Ryan over at The Minimalists for using the medium to help spread the life-giving message of owning less.

6. Internet Data Mining. I include this reason not because I love it, but because it is true and belongs on the list. Social media giants (actually Internet companies of every stripe) have made gathering data about users as their platform for profit. As a result, they are able to tailor your experience based on your preferences as displayed online. Visit Amazon because you need a new pair of shoes? Don’t be surprised to see those same shoes being advertised to you the next time you visit Facebook, or Google, or any number of websites. Stumble upon a website dedicated to minimalism? Don’t be surprised if you start seeing the word any number of future places you visit online.

7. Increased global social awareness. Injustice, poverty, and malnutrition have always existed. But as new technology has made the world smaller by making global images more accessible, our awareness of the disparity has increased. Some are responding to the call and using their finances to make a difference on a global scale by feeding the hungry, providing clean drinking water, fighting back epidemics, and speaking up for the voiceless wherever it is needed. Generosity, in so many ways, fuels minimalism as a lifestyle.

8. The continued growth of minimalist blogs, books, and stories. There are more blogs and books today focused on the topic of minimalism than at any point in human history. I love it! Becoming Minimalist has been featuring new and upcoming writers in the world of minimalism since 2010. And we will continue to do so in the future. A wide range of voices, cultures, and stories is healthy and needs to be championed. I have honestly never been more proud or excited about the movement.

The Baader-Meinhof effect may describe why you are more open to seeing minimalism today than ever before. But the fact remains that you had to be introduced to it at some point. If this blog played a small role in that happening, I am thankful. If not, I am glad you found us.

Minimalism may be more prevalent in our world today than ever before. But it is still counter-cultural… and there still a whole bunch of people who need to hear about the life-giving benefits of it. Let’s keep spreading the message together.